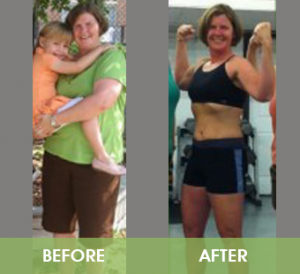 Growing up I was always the skinny kid, not particularly active or athletic, just skinny.  I put on weight in college, but starving myself and running took care of that and I graduated weighing 106 pounds and a size 6.  Unfortunately 20 years of working long hours, long commutes, eating in restaurants, inactivity, having a child, etc. took their toll.  First I was a little bigger, then “average” then beyond.  Someday I would get in shape.  You know, when I had unlimited time and money and could have my own personal trainer and chef make me over.

Last spring I began watching the Biggest Loser for the first time and one evening while watching had enough.  I got off the couch and hit the scale and was 195 pounds.  That was my “something’s gotta change” moment.  I opened the latest fitness game for my Wii (which I had had for three days) and put it in and worked out until after midnight.  I made it my mission to lose 30 pounds by our annual beach trip.  Research led me to clean eating, a whole foods diet, and daily interval training and I lost 31 pounds by the end of June.  The change was noticeable, but I had only gone down about 1 size.

Then I had to have major surgery and was forced to be inactive again.  Slowly my food choices became worse, my clothes became tighter, and I felt less fit, even though the scale didn’t change.  Three months later when I was allowed to exercise I was both too lazy and too scared.  In January I reconnected with Brandon and discovered his program at Habitat Fitness.  I LOVE working out here.  I work out so much harder with Brandon to motivate me, and other people to challenge me to do more.  I can do things now that I didn’t think I would ever do again, and I’m still improving. With this training in four months I have lost 28 pounds and now weigh 138.  My body fat went from 37% to 26.4% and I have lost over 15 inches and 4 clothes sizes.  Now I’m a size 6-8 and it is SO fun to go shopping, especially for bathing suits.  My results motivated my husband to get involved and he had an extremely successful 6-week transformation also.  Most importantly both of us are committed to healthier lifestyles, especially for our 5-year-old daughter.  Our goal is to instill in her the habits that ensure she never has to fight this battle later in life.  This is a journey for us, and we are excited to see our continued good results.

Thanks so much Brandon for bringing fitness not just to myself but to my whole family!