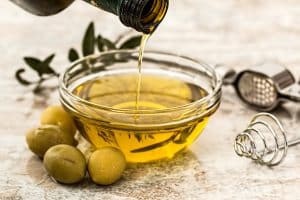 Like many of the healthier oils, olive oil is plant based. If it’s the highest quality, with the most nutritional benefits, it’s extra-virgin olive oil. Just what are the benefits of olive oil? First, its fatty acids are primarily monounsaturated. Those help your cholesterol profile by increasing the good cholesterol and decreasing the LDL or bad cholesterol. It also has about 14% saturated fat and 11% polyunsaturated, in the form of omega-6 and omega3. The more refined olive oil is the less oleic acid it contains. According to many studies, oleic acid reduces inflammation, which is linked to several serious conditions.

It’s good for the brain but don’t fry with olive oil, but use it to sauté, to dip or salad dressing.

Olive oil doesn’t have a high smoke point, which means at higher temperatures, it smokes. It also loses many of the health benefits and can actually degrade to create potentially harmful compounds. If you use extra virgin olive oil without the high heat, it has benefits like increased hair growth and increasing cognitive functioning. It’s the polyphenol oleocanthal that helps fight Alzheimer’s and the monounsaturated fat.

Lose weight and reduce the risk of type 2 diabetes with olive oil.

Like other types of fat, olive oil makes you feel fuller for longer, so you’ll eat less. The long-chain monounsaturated fats in olive oil digest more slowly, releasing energy over a longer time, unlike carbs that spike your blood sugar and then cause a sudden crash, making you want and sometimes, need to eat again sooner. Several studies have shown that a diet rich in olive oil, such as the Mediterranean diet, can also lower your risk for type 2 diabetes.

Olive oil may reduce your risk of stroke.

While heart disease is the leading cause of death in developed nations, strokes are the second leading cause. A scientific review of 841,000 subjects showed olive oil was the only monounsaturated oil that associated with reduced risk of stroke. A smaller review, which included 140,000 subjects, also showed that people who consumed olive oil had a far lower risk of stroke than those who didn’t. Those same studies also showed people who consumed more olive oil had a reduced risk of heart disease.

For more information, contact us today at Habitat Health and Fitness